There are 5 important skill sets necessary to coach a healthcare team for peak performance.

If you ever played a team sport you likely appreciate the necessity of coaching. A coach is that person who, like an orchestra’s conductor, keeps the team synchronized and harmonized.

A coach is the person that understands everyone’s individual and necessary contribution to a desired result. They are also the person who sees the big picture and yet understands the many subtle nuances that move their team from average to peak performance.

How to Coach your Team to Peak Performance

Coaching a healthcare team for peak performance is similar in many ways to coaching a team sport.

At Line of Sight Coaching, we help doctors become more “coach-like” by teaching simple skill sets that have been proven to be very effective in creating and sustaining high performing teams. 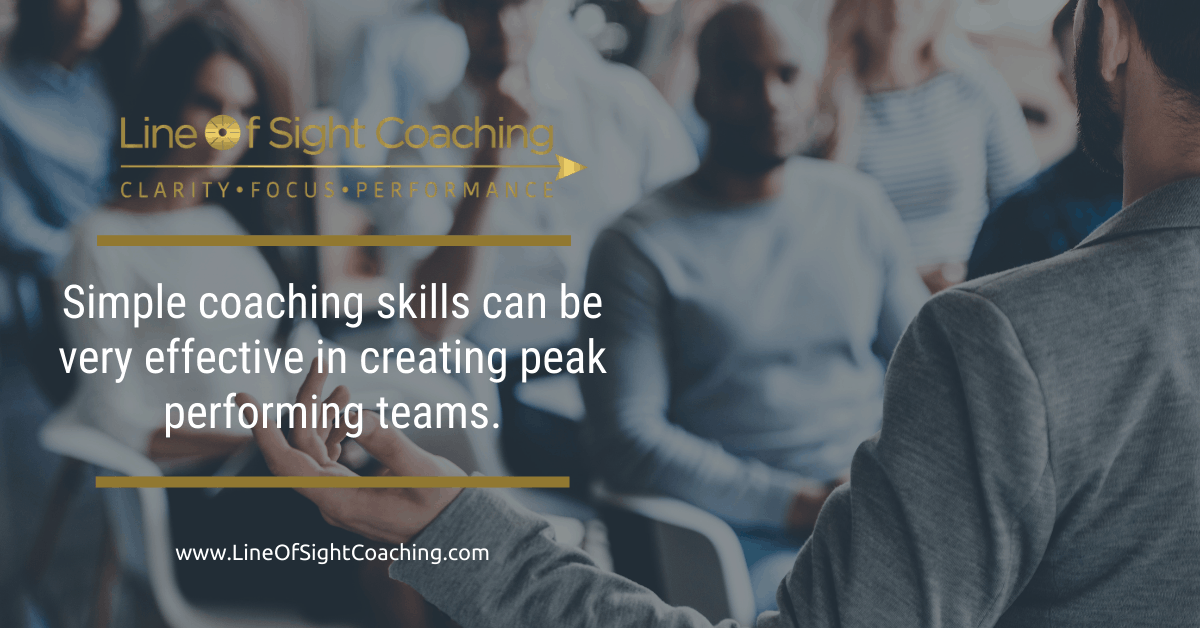 The following are five of the most important skill sets necessary for coaching a team to peak performance:

All good coaches are good leaders. The very act of coaching requires leadership skills. Leaders are realists that can provide unfiltered, honest assessments of their organization’s current status.

They are also visionaries who see beyond the short term and communicate a long-term vision that is both compelling and motivating for the team. They provide the resources and support necessary for the team to move beyond the status quo and toward a preferred future.

When 75 members of the Stanford Graduate Business School’s Advisory Council were asked to recommend the most important capability for leaders to develop, their answer was nearly unanimous: SELF-AWARENESS. The same is true for coaches.

Effective coaches have a high degree of self-awareness and emotional intelligence. They understand how their words and actions are perceived by their team. Armed with this vital knowledge, they are capable of “self-regulating” their interactions with their team to create an environment conducive to peak performance.

Like any goal-oriented initiative, having a clear picture of what you are trying to achieve is critical to achieving the goal. Collaborate with your team when creating the vision. The more input they have, the more buy in you will receive.

One of the most critical tasks for any leader/coach is the development of human capital. Research has shown that the very best and most profitable businesses are those that have made significant investments in their people.

There are two effective ways to develop your team. The most obvious way is to improve their technical skill set. This is often referred to as “horizontal development” and is an important step in creating high performing teams.

Consider this: If we insist on making every decision in our practice, we become an unnecessary bottleneck and we are unknowingly undermining our team’s ability to reach peak performance. Many of the non-clinical decisions can and should be made by our team.

By allowing team members to think and act within predetermined guidelines, we are taking these burdens off our plate, removing unnecessary barriers to efficiency, and promoting individual and team confidence and growth. What is important is that each team member has the support and authority to act independently while considering the impact of their decisions on the entire team. This is when interdependent thinking, often requiring collaboration with other team members, is most important and most valuable.

Simple coaching skill sets can be very effective in creating peak performing teams. Michael Bungay Stanier has written two excellent books that teach useful coaching skills for anyone wanting to take their team to higher levels of performance. Stanier’s first book, The Coaching Habit, presents seven simple coaching questions that doctors will find invaluable when attempting to improve individual and team performance. His second book, The Advice Trap, serves as a primer for individual and team vertical development. Anyone interested in developing these vital skill sets should make it a point to read both books.

One of the best and most effective ways to achieve peak performance is through reflection. At the end of each day or the beginning of the next day, take a few minutes to reflect on the previous day. What went right? What could have been improved and why? What was a barrier to achieving peak performance?

Again, using simple coaching skills and language will remove the team’s fear of offering an honest and unfiltered self-appraisal. These few minutes will prove to be one of the best team building techniques and doctors will begin to see the staff improve their level of performance faster than they ever thought possible.

In summary, becoming more coach-like does not require rigorous training or certification. Anyone can learn simple skill sets that will prove invaluable in moving their organization to higher levels of productivity and profitability. More importantly, coaching your team is arguably the best way to sustain peak performance while simultaneously building an optimal practice culture. Do yourself a favor and read Michael Stanier’s books. You will be very glad that you did.

If you are interested in going deeper on this concept and others to help achieve Peak Performance in your practice, our next cohort that starts September 2021 of the Leader to Leader Group Coaching program is open for registration.

In the Leader to Leader group coaching program, we meet you where you are and help you get to where you are intended to be. This involves addressing any urgent issues (happening a lot these days!) and then helping you, your team, and your business become a more robust version of yourselves.

We focus on specific competencies found in highly effective leaders who serve the highest performing businesses. Click here for more details on this leadership program and mastermind created just for dentists, physicians and healthcare professionals. 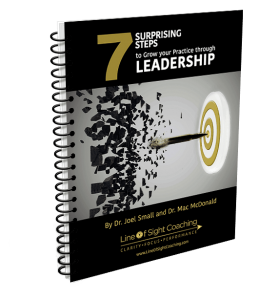